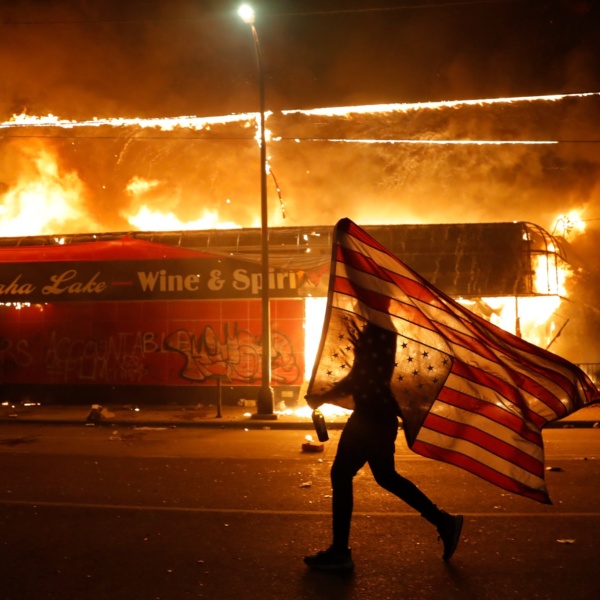 I sit here staring at a blinking cursor mostly lost for words. I am grieving the horrendous death of George Floyd like everyone else but I know I’m processing only a sliver of its significance. I am hesitant to say much of anything because I feel so unqualified. I’m a white due who doesn’t even tan, I just burn. I want to listen to, learn from, and empathize with the lived experience of people of color—be a student first and critic last. I’m not black or brown and I am reluctant to speak for those who are or even add my voice to the fray.

But I’m a leader and I have a responsibility to say and do something. As I look back through this stream of consciousness first paragraph I notice how self-absorbed it reads. Literally every sentence starts with “I” or “I’m”. This isn’t about me. See, I watched a black man address an officer of the law by that title—officer, not “pig” or other pot shots—as he begged for the ability to breathe for minutes that felt like months. I watched a black man call out for his momma as fellow officers and citizens stood by, hands in pockets. It needs to be called what it is: shameful, flagrant, heinous, evil.

On Pentecost Sunday I had hoped for a different kind of fire. Our world is burning down and it needs to. We have to feel the blaze the black community has been enduring for generations. If only for a cultural second, we are forced to stare eyes peeled, mouths agape, speechless, and breathless into the incandescent glow of burning city streets tainted with tear gas and smoke and maybe, just maybe, we can catch a glimpse of or hear a fragment of the vacuous echo of a sobbing black mothers grieving the loss of sons and daughters time and time again.

People of color don’t need to told to turn down their emotion because white people are uncomfortable with its substance. What would you do if it was your kid on the ground gasping for air? I hesitate to think why I might do. Plus, let’s be honest, we are never comfortable with protests of racial inequality or inequity, civil and peaceful or otherwise. It’s always inconvenient. It hurts professional sports profit sharing.

Hear me, I’m not condoning the riots and looting that litter news headlines. I value law and order. I pray for peace. I, like others, decry the violence we are seeing around our nation. I do not believe that the four cops featured in the George Floyd murder video typify law enforcement, not by a long shot. Strongly believing all these things though, I’m not black. I’ve never, not once, felt unsafe jogging through my or any other neighborhood in town. I won’t have to explain to my daughters how they’ve aged out of their “cute” stage and will now be perceived as a threatening and unsettling presence because of the color of their skin and choice of clothing. I’ve never been profiled by racially insensitive law enforcement officers. The closest I’ve ever come to anything like that was dealing with a small town cop in Pickens, SC who was on a power trip and wrote me my first, and so far only, speeding ticket for going 10 over on an empty country road, on a hill, following someone going the same speed. He saw out of state plates and saw easy money. He said as much. All that being said, just because my lived experience of racial inequity is limited or absent does not mean it doesn’t exist. How many more videos do we need?

Derek Chauvin (the cop pictured kneeling on George’s neck) was a bad egg. I agree. Stories and reports continue to surface to further confirm that truth. But what about his colleagues who helped restrain George Floyd and did nothing to answer his pleas for life? Are they bad eggs too, horrible racists who couldn’t have cared less as they watched George go limp and lifeless? I’m speculating for course, time will tell, due process will be served, but I doubt it. I imagine their hearts are nowhere near as calloused and cold as the video would have us believe. This is why justice for this moment is so much bigger than Derek Chauvin being charged with manslaughter and third degree murder. True justice addresses the system that allowed, in fact practically necessitated, these cops honor their fellow officer more than the black man dying beneath them.

We have a bigger problem than bad egg cops and racist grandmas. It transcends geographical barriers and isn’t confined to urban centers. It’s cultural, historical, socio-economical, all the “i-cals”. I’m bias for sure, but I believe it is spiritual at its root. We have an empathy problem. We have a hard time seeing outside of our lived experience because to do so risks popping the comfortable, insulated bubbles we inhabit.

We can’t ignore it anymore. Fiery riots (even if largely instigated by outsiders, organized crime, or even white supremacists) ought to wake us up to the truth that we have to do more, especially within the body of Christ, than simply say, “I’m not racist.” We have to be anti-racist. We have to work to dismantle systems and structures that aren’t equal or equitable. And we can. We can raise new generations that aren’t ignorant to these issues nor inoculated against helpful conversations because they are so politically or religiously charged. We can and must do better at talking about these things civilly, working toward real solutions, legislative or otherwise (though you can’t change hearts through legislation), and standing with and lending our voices to communities in pain.

God used a moment of impulsive and illegal action (murder) in Exodus 2 to shape the life of Moses, the great emancipator and law giver of the Old Testament. Shortly thereafter in the narrative, this dude brings down divine laws from Yahweh’s holy mountain, one of which was “thou shall not murder,” with blood stained hands. God was able to use the crisis moment of Moses’ life as the springboard to his higher calling. My prayer is He is doing the same thing in our nation and in our churches today in these tumultuous times.

But hey, don’t take my word for it. Listen to a black or brown friend. Hear their hearts and stories. Trying walking a mile in their shoes (so much as is possible) before trying to correct their stride.

Where Is the Life in Our Churches?

Today I have been reflecting on nature of Church growth and Kingdom advance in light of a parable of Jesus in Luke 15. It seems so many churches in our nation are looking around at a massive lack of fruit in our ministries (praise God though this is not the reality in many parts of the world). We wonder where the life went, were the enthusiasm went, where the power went. I wonder if we couldn’t more appropriately formulate the queery by asking: “Where did Jesus go?”

Parable of the Lost Sheep

15 Tax collectors and other notorious sinners often came to listen to Jesus teach. 2 This made the Pharisees and teachers of religious law complain that he was associating with such sinful people—even eating with them!

3 So Jesus told them this story: 4 “If a man has a hundred sheep and one of them gets lost, what will he do? Won’t he leave the ninety-nine others in the wilderness and go to search for the one that is lost until he finds it? 5 And when he has found it, he will joyfully carry it home on his shoulders. 6 When he arrives, he will call together his friends and neighbors, saying, ‘Rejoice with me because I have found my lost sheep.’ 7 In the same way, there is more joy in heaven over one lost sinner who repents and returns to God than over ninety-nine others who are righteous and haven’t strayed away!

Maybe we lack the power, purpose, and passion of the Church in other parts of the world, nation, or city because Jesus has literally left the building. He said he would, but he wanted us to go with him. Could it be that many of our churches have slipped into a comfort-zone fully dedicated to the 99 while Jesus is off looking for the 1? What might it mean for our churches that when Jesus brings the 1 home we are so self-consumed that we don’t even celebrate? What if Jesus spends his time and effort finding a lost sheep and “joyfully carries it home on his shoulders,” only to find that no one missed it and no one has their party pants on?

Maybe we lack life in our churches because Jesus is taking lost sheep to places and people who will celebrate with heaven when sinners come home and reorient their individual and institutional priorities to see more come home.

Here is the cold hard fact: Jesus will always leave the 99 for the 1.

That is Hebrews 13:8 “Jesus Christ is the same yesterday today and forever.”  This is called the immutability of God. It doesn’t mean you can’t turn off his volume (while you can’t do that either).  What it means is God character is eternally consistent. He has the same heart for people from age to age. So, Jesus is still leaving the 99 for the 1 today.

A Faint Cry in the Cold Wind- from Thanksgiving to Advent

A Faint Cry in the Cold Wind

We are now in the thick of the Christmas season. By the time you are reading this, your house has probably transitioned from being perfumed by pumpkin spice and the tantalizing smell of stovetop dressing to the strong mixture of real or artificial pine and the crisp smell of cinnamon apples. That is if you are not a bachelor; ladies are the ones who tend to pay attention to seasonal smells and men often simply benefit passively.

It may seem superficial or cliché at this point but we still have to pause and remember the reason for the season. The hustle-and-bustle of Christmas shopping and adorning our homes and sanctuaries with wreathes and lights quickly tramples over the slow, family oriented nature of Thanksgiving. The transition from Thanksgiving to Christmas in our culture has been all but erased by stores opening earlier and early on Friday until they now steal away even the tiniest moments of family reflection and laughter on Thursday afternoon. Before the tryptophan of the turkey has us v-lining for the couch, we are all suited up standing in line outside of Wal-Mart, or any other big box retailer, hoping the cool air will give us a second wind for shopping.

The all be eradicated gap of Thanksgiving to Christmas can also serve as the perfect time to reset our priorities. In biblical fashion, Christians are not called to divided allegiances but sole allegiance, not one among many, but one primary priority, “but seek first his kingdom and his righteousness, and all these things will be given to you as well” (Matthew 6:33).

Advent is a time where the witnesses of salvation history collectively hold their breath. Into the void of barrenness and hopelessness God moves mightily in the form of a defenseless baby in the chilly night air with only animals for comfort and company while everyone else is too busy to notice. May it not be said of us this season that we are too busy to hear the not so faint cries of our broken world echoed by the infantile cries of our enfleshed Savior.

Lord help us to cancel out the noise and hype of consumerism to marvel on our knees at the sight of a sacrificial lamb born to us and for us.